Discover how we generated new leads for NNIT by presenting their brand new service to the market.

A cohesive campaign with a clear focus

Our most successful inbound marketing campaign has had a clear overall theme. Every part of the campaign plays their part to drive the lead further in the buyer's journey and closer to a purchase decision. Read about how we produced an inbound campaign with a clear message for NNIT.

NNIT is one of Denmark’s leading consultancies in IT development, implementation and operations. NNIT is a global company whose service offerings include advising, building, implementing, managing and supporting IT solutions. NNIT is also a certified Microsoft Gold Partner. NNIT purchased an inbound campaign of Brightvision as a part of Microsoft’s Digileads concept, which means Microsoft is co-funding the campaign. The campaign would consist of two content offerings and lead nurturing, in order to generate new leads and drive them furhter along the buyer’s journey, closer to a purchase decision.

NNIT and Microsoft wanted to promote a new offering and concept; SAP on Azure.  This new service is that NNIT helps companies to migrate their current SAP business solution to Microsoft’s cloud, Azure. The campaign package NNIT purchased included, among other things, two content offers, setup of two landing pages, automated lead nurturing and paid promotion. The primary goal of the campaign was to generate new leads and drive them closer to a purchase decision. As a secondary goal, the campaign would position NNIT as thought leaders on migrating SAP applications. The campaign’s target audience was CFOs and IT Managers at large enterprises in Denmark.

Our work began with two workshops with NNIT, for us to get a clear picture of the offer and NNIT’s business situation. After the workshops, we delivered a strategically designed campaign plan. Since NNIT wanted to promote a brand new offering, we focused the entire campaign around this particular subject. We produced a new E-book on the subject and planned a physical seminar which would be held in Copenhagen. We also built two sets of landing and thank you pages. The E-book could be downloaded on one of them, the other was a sign up page for the seminar. The E-book and the seminar was promoted on social media (organic posts and ads) as well as by email marketing.

The campaign was a success. The E-book generated 91 leads, with each download triggering automated email nurturing flow. 47 people in total signed up for the seminar, which made it possible for NNIT to meet and talk to potential customers face to face.

To reach the campaign goals, generating leads and positioning NNIT, we had to provide engaging content of value to the right people at the right time. To achieve this, we worked according to a carefully structured process. The process can be divided into four parts: campaign strategy, content production, paid promotion och evaluation.

The project began with two workshops held together with NNIT. During these workshops, we asked all questions we needed answers to in order to produce a successful inbound marketing campaign. During this phase, we also created a buyer persona, a semi-fictional representation of an ideal customer to target with the campaign. We decided that the campaign would include production of a new E-book and to host a physical seminar at NNIT’s headquarters in Copenhagen. The E-book would be available for download by submitting a form on a landing page. Each download was set up to trigger an automated workflow of emails with additional content of value. For the seminar, we created a specific landing page, optimized for conversion. All content assets in the campaign was centered around the SAP on Azure theme. This type of cohesive campaign is an effective way to increase the likelihood of leads converting to customers. Especially in this case, when the campaign theme is a brand new solution on the market.

Both the E-book and the seminar would be promoted on social media by organic posts and paid promotion. We also decided to promote the E-book by sending out an email to a carefully segmented part of NNIT’s existing database.

During this first phase of the project, we also set a timeplan for the entire campaign. The timeplan included deadlines for the E-book production, the campaign promotion period, dates for publishing of the organic posts and an end-date for the campaign. 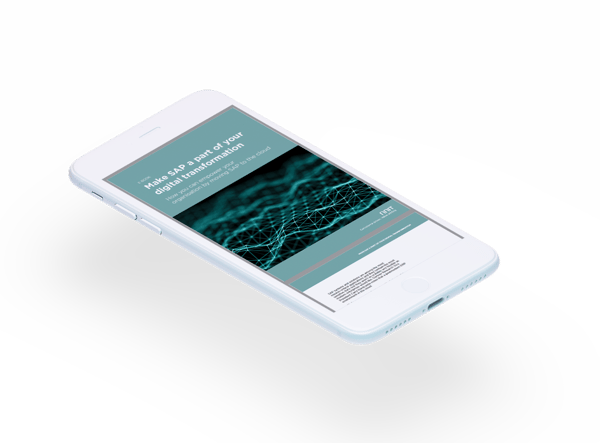 You can’t be successful in your inbound marketing efforts without offering engaging content that the target audience will find useful. A key element of the campaign was to align all content assets so they followed the same theme and all played their part in driving the lead closer to a purchase decision. The two content pillars of the campaign was the E-book and the seminar in Copenhagen.

Cloud based SAP applications is a new offering in NNIT’s industry, which placed our target audience in the early stage of the buyer’s journey. We produced and wrote a new E-book on the subject, called Make SAP a part of your digital transformation. The production of the E-book was made in close cooperation with NNIT, and included two interviews and two correction rounds. This E-book was the first of two content offers in the campaign.

The second content offer of the campaign was a physical seminar, which would be held at NNIT’s main office in Søborg, Copenhagen. We worked together with NNIT to set an agenda that was related to the content of the E-book, to make signing up to the seminar a natural next step for the people who downloaded the E-book.

The automated email nurture flow also contained content of value. We produced a guiding checklist, with five things to consider regarding migrating a SAP system to the cloud. 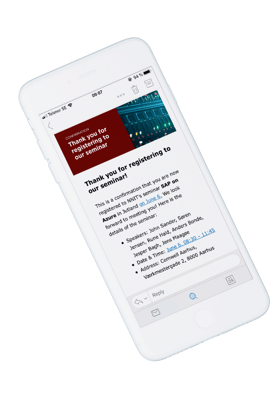 For the E-book, we also did an email send-out to a carefully segmented list of NNIT’s existing database.

Throughout the campaign, we analyzed and optimized the performance of the ads. We tweaked things like target audience, text and image to continually improve the results. And this work gave result, giving us as low cost per click (CPC) as 35 SEK. 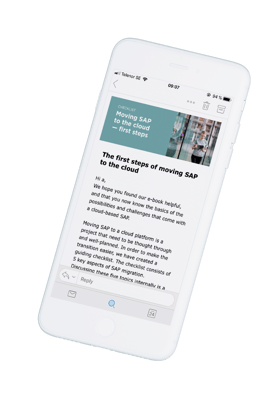 Whether a campaign is successful or not depends on the original campaign goals. The primary goal of this campaign was to generate new leads, and the secondary goal was to position NNIT as a thought leader on the subject of cloud based SAP systems. The campaign resulted in 112 leads in total. 91 people downloaded the E-book and 47 people signed up to the seminar. With an ad budget of 25 000 SEK, this gave a cost per lead at 223 SEK. The number of bought impressions on social media reached 144 464.

Both NNIT, Microsoft and Brightvision was pleased and proud of the campaign results. NNIT’s sales department was given many new leads to work with and the seminar was a success with a lot of participants. The campaign also positioned NNIT as a thought leader on the SAP on Azure topic.