Explore how we created an integrated lead generation campaign that generated 68 leads and a CTR three times as high as the LinkedIn average.

When you're fresh at the market you're faced with several challenges – especially when it comes to creating new business opportunities and building brand awareness. Discover how we created an integrated lead generation campaign to help Gibon overcome some challenges, by both generating new leads and put their name on the map.

In January 2018, Gibon was launched as a new company and brand. They offer IT solutions to small and medium-sized business in Sweden and have 10 offices. As a newly launched brand, Gibon needed to establish themselves on the Swedish market and generate business opportunities and leads. Hence, Gibon chose to contact Brightvision with a request to create awareness around their new brand as well as generating qualified leads (MQLs) with a proven ROI of the campaign.

The purpose of the content campaign was primarily to strengthen Gibon’s inbound marketing efforts. The campaign was also set out to generate leads and create interest for Gibon within the target audience. Brightvision decided to create an integrated campaign, which included both inbound and outbound marketing.

Brightvision's role was to plan, execute and evaluate the lead generation campaign, based on the following components:

The goal was to generate leads and build awareness around the new Gibon brand. In order to succeed and reach this goal, we made the decision to use an integrated inbound and outbound campaign. This means that we, via inbound marketing, could focus on providing the right content, to the right target group, in the right time, while at the same time use telemarketing as an integrated part to qualify the leads. The process can be divided into four phases; campaign strategy, content production, promotion, and evaluation.

The project started with two workshops together with Gibon. At these workshops, we asked all the necessary questions needed to create the content. During this first phase, we also set a time plan for the campaign. Further, a keystone was to identify the target group by creating 3 different personas for the campaign. This was done by market research as well as interviews with salespeople at Gibon.

We partly used pre-existing content to drive leads, which was re-branded to align with Gibon’s graphical profile (also called "white label content"). This way we could quickly produce and launch different content assets.

The main content promoted was a whitepaper called “Start your journey towards digital change” and was created to help companies take their first steps into the new and modern workplace. We also created a one-page checklist used as follow-up content and nurturing purpose. 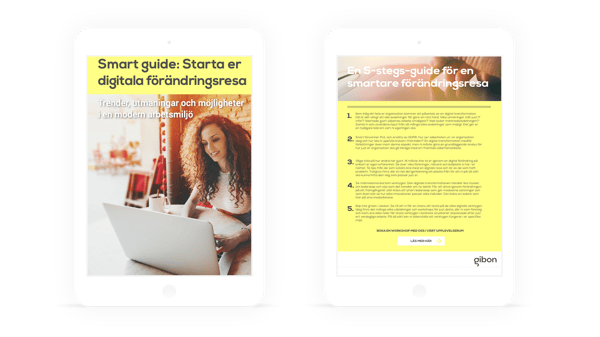 The landing page is a fundamental component of the campaign, driving leads to convert by filling out forms. We used SharpSpring as a CRM and Marketing Automation system, to be able to gather all information – such as website visits, conversation rate, list, etc. – in one place.  As the SharpSpring tool supports the inbound methodology, it simplified all work processes and enabled us to work with all marketing channels (like social media, email marketing, web, landing pages, forms, nurturing/workflows) in an integrated way. It was easy for us to optimize and create reports as we controlled and measured all work from one system.

The workflow process of implementing SharpSpring was: 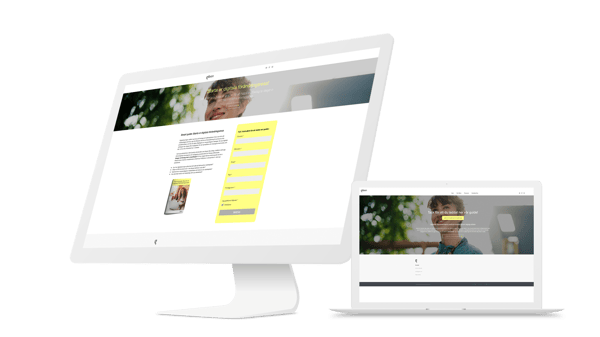 Yet another piece of content used in the campaign was a blog article. The blog served as an important part to drive the organic traffic and leads to the landing pages offers. With a clear call-to-action in the post, we were able to point the visitors to the downloadable content and generate leads.

We created social posts to drive leads to each landing page/premium content, customizing each social content after the audience target and persona. We used both paid social (sponsored) and organic posts in channels like LinkedIn and Facebook. We launched five sponsored ad campaigns consisting of 12 ads. The highest performing ad generated a CTR of 1.14%. That is three times as high as LinkedIn’s average CTR of 0.3-0.45%.

Videos are a great way to generate traffic to landing pages, hence we produced a so-called ”KIT-film” for the campaign. The video served as a complementary to the banners on social media.

To qualify the leads coming in from the inbound campaign, we used our telemarketing team and Inside Sales Specialists. When a visitor becomes a lead, our SDRs called and qualified the lead. Depending on the outcome, we routed the qualified leads to Gibon's sales department. If the lead was not qualified, we kept it in our process for further nurturing.

Gibon had an initial paid media budget of 30,000 SEK. By using LinkedIn's sponsored ads, we used the budget to create a campaign that generated a total of 68 MQLs. Out of these, 8 became SQLs, resulting in a generous 38 % conversion rate.

The landing pages are still active and continue to generate leads while Gibon is working on producing new and educational content for their prospects. Soon, they'll be ready to launch another campaign. With learnings and insights from previous campaigns, they'll be able to generate even better results and generate more leads.

Overall, we draw the conclusion that we achieved all campaign goals, as we made sure both to generate new qualified leads and to raise brand awareness. 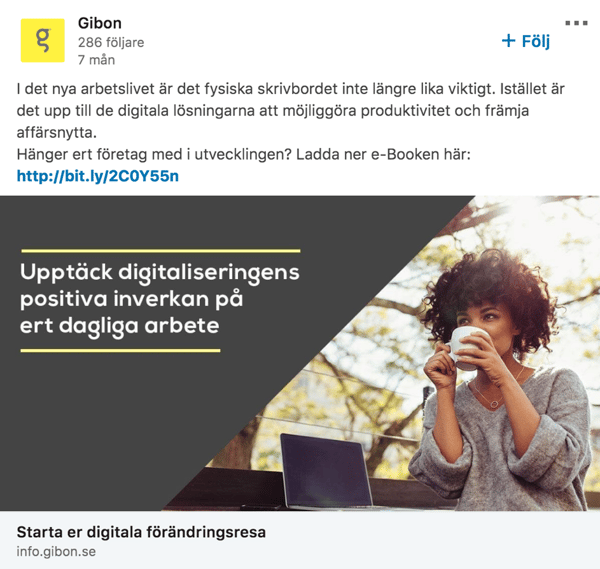